Category and Code of OPS

OPS codes have a maximum of six digits; they are not purely numerical but can include (lower-case) letters from the fourth digit onwards. The following notes refer to the presentation of the codes in the print edition or the HTML online version.

The fifth character is separated from the 4th by a dot.

For six-character codes, a distinction has to be made between precoordinated and postcoordinated codes.

Postcoordinated codes are assembled by the encoder from subclassification lists in accordance with a note ("Hinw.:", Hinweis). They are denoted by a double asterisk after the code. 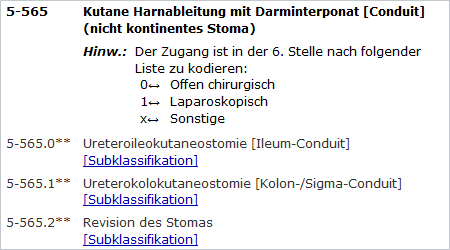 In our example, the five-character code marked with a double asterisk has to be expanded by a sixth digit according to the note. The sixth digit can take a value from the list, i.e. 0, 1 or x ; there will be a note if a particular combination - e.g. fifth digit 0 and sixth digit 1 - is not possible. The purpose of this is to combine divisions that are the same and to avoid redundancies. A list that applies to more than one four-character category is placed before the first category, with references to the list within each of the four-character categories. (Double arrows indicate the requirement of an additional marker for the particular side. More on this below.)

In three instances, letters as well as numbers are used from the fourth digit:

A code without subcodes is referred to as a terminal code. Only terminal codes may be used for encoding. This ensures that encoding is always as specific as possible. The demand for specific encoding also entails that categories such as "Sonstige" (ohers) or "N.n.bez." ("nicht näher bezeichnet", not elsewhere classified) are only used in cases where there is actually no documentation of specific information.

Class attributes and other elements, terms and symbols of a code

Inclusion notes are prefaced with "Inkl.:" ("Inklusivum") and contain more detailed information on the content of the code or example of issues falling under this code.

Exclusion notes are prefaced with "Exkl.:" ("Exklusivum") and list measures that do not fall under the code in question; the applicable code is given in brackets. If no code is provided, the measure cannot be encoded.

Double arrows ↔ indicate codes for which an additional marker is obligatory as an indication of side for measures on paired organs: (R for right, L for left, B for bilateral).

Double asterisks ** indicate five-character codes that need to have a sixth digit added from a list of extensions.

Round brackets () contain optional elements in the names of procedures; their presence or absence has no impact on the encoding.

"And" in class titles of three- or four-character codes is used as meaning "and/or".