ICD-10-GM is a monohierarchical alphanumeric classification for diagnoses with up to 5 hierarchical levels. The following information is provided for an initial understanding of ICD-10-GM. Encoding requires full familiarity with the "Anleitung zur Verschlüsselung" (Encoding instructions in the preface of ICD-10-GM) and - for encoding for billing purposes in the inpatient sector - the application of the "Deutsche Kodierrichtlinien" (German Coding Guidelines, DKR and DKR-Psych) of the self-governing partners.

The Tabular List consists of 22 chapters (I to XXII), covering all diseases. The organ-specific chapters III to XIV make up the core. Diseases that cannot be allocated to a specific organ are pooled in the remaining chapters. Each chapter covers a code area designated by one, two (Ch. I, II, XIX) or four (Ch. XX) letters. The letters H and D are both used in two chapters each. (The class titles of the chapters correspond to the class titles of the English version of ICD-10.)

Monohierarchical classifications structure a subject area into "nested" classes of different hierarchical levels. In ICD-10-GM, chapters are divided into blocks, blocks into categories, and categories generally contain subcategories. Chapters, blocks, categories and subcategories constitute the classes of the classification and are each denoted by a title, the class title. Each class title of a category or subcategory is allocated a code reflecting the position of the class within the hierarchy. Chapters and groups are designated by the range of codes within their scope.

The central element is the category; class titles of categories are assigned a three-character alphanumeric code, marked as highlighted in black. The three-character categories have subcategories whose codes can have four or five characters. In the general ICD-10-GM language, the use of the term "class" is not uniform. Quite often, the term "code" is used synonymously for "class", "category" and "subcategory", the term "category" is also used for "subcategory". A category is frequently simply described by the number of digits as a three-, four or five-character code.

This leads to the following 5 hierarchical levels:

For example, "Kap. 1 Bestimmte infektiöse und parasitäre Krankheiten" (Chapter I Certain infectious and parasitic diseases) covers the code range A00-B99. The first group of "Infektiöse Darmkrankheiten" (Infectious intestinal diseases) comprises the code range A00-A09. The first category in this group is "A00.- Cholera". The point-dash notation in the GM version indicates that category A00.- has subcategories (A00.0, A00.1 and A00.9). The fourth digit is separated by a decimal point. 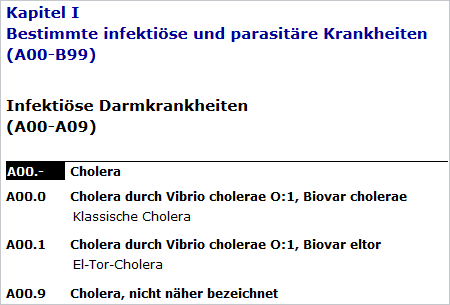 Each chapter starts with a chapter preface containing a list of blocks included in the chapter as well as codes with exclamation marks and asterisks. It can also include comments of concern to all blocks and categories within the chapter. Similarly, there may also be notes underneath block titles that are of concern to all categories within the block. Within the categories, there may be further notes providing more detailed information about the category. All notes from all different hierarchical levels have to be taken into account in the encoding process. The example below shows part of the preface to Chapter I; it contains an inclusion note ("Inkl.:") as well as several exclusion notes ("Exkl.:") which have to be taken into account for all categories A00-B99.